This week, I purged a set of 27 pretty disparate items. The week largely started with things from my office -- which has already been pretty trimmed back, but quickly spread to everywhere else in the house.

With week four starting tomorrow, I expect I'll start paring back my wardrobe a bit and possibly hitting my hiking and camping gear again.
Posted by Adam Shirey at 9:04 PM 3 comments:

Fall in Seattle and making butter

We had a late night yesterday due to us having company over. While the boys usually get to bed between 7:30 and 8:00, it wasn't until 10:45 or so that they finally got to bed. So this morning, we had some deviation from our normal Sunday. Andrea got up with the boys and let me sleep in, and we traded a bit later. After playing downstairs and outside for a while, I decided to take them on a walk. They got on their scooters and we went down toward the village, stopping by the tennis courts so they could play on the turtle and enjoy the fall leaves: 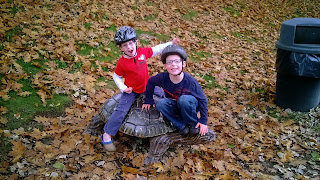 For a full two hours, we walked/rode scooter, played in the leaves, went to Serendipity for a snack and play time, and made our way home.

After getting home, it was already past noon, so we grabbed some lunch. The four of us then got in the car, grabbed a few necessary groceries, then went to Discovery Park. I've been wanting to go for a long walk around Seattle's largest park for a while. It's been too long since I've been there. We took a different route through the park than usual, exploring different paths altogether.

After perhaps two hours walking, the boys and I made our way to the beach while Andrea went back for the car. By now, Reed was getting a bit chilly, so he got an extra layer. 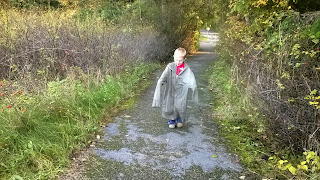 And we made it to the beach where we played; looked for crabs, sticks, mud, and other goodies; and we got our feet wet. 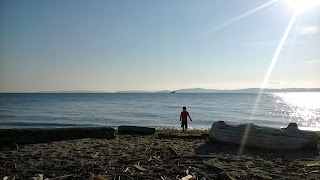 Finally, we made our way home. Earlier, when at the grocery store, we picked up a pint of heavy whipping cream. I decided today we would try the experiment of making our own butter, so I filled two small mason jars halfway, sealed them and we started shaking them like crazy. 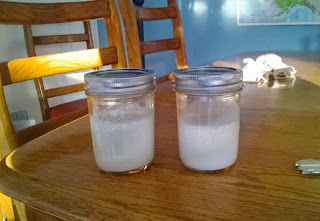 Of course, I can't make homemade butter without bread to go with it, so our bedtime snack was straight-from-the-oven bread with salted, freshly-churned butter on top.

Today was a great day.
Posted by Adam Shirey at 10:19 PM No comments:

Last week's kickoff of the minimalist game was an easy reduction of seven items, but this week, we doubled to two items per day.

Day 5: Two blaze orange bandanas from my hiking gear
Day 6: Flint for fire starting and a set of bamboo flatware and chop sticks, both also from hiking gear

Admittedly, my jetsam this week is pretty small stuff: it could all fit into a small box. Yet save for the motorcycle pants, these are all things I've had for a minimum of two years, though some of them go quite a ways back -- my MTU ID goes back to around January 2001. 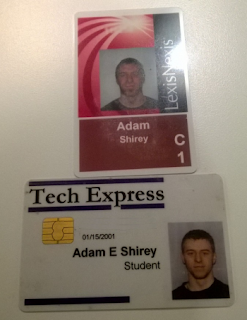 I'm already looking forward to next week. After the first week, I had a bit of trepidation about turning up the heat and getting to 90 items by November. As it stands, though, the only difficulty will be finding the time to go through my things.

The more I get rid of, the more less I find I need.
Posted by Adam Shirey at 8:36 PM No comments:

Today is the conclusion of week one of the minimalist game that I am doing with Carrie, et al, in which we're getting rid of progressively more unnecessary items from our houses. A brave few (Rachel, for example) are doing the full n items on day n for a total of 496 items in 31 days:

Most of us, however, are taking the more moderate approach of one item per day in week one, two items per day in week two, and so on. I've been a bit of a laggard in keeping up, as most of the weekdays I didn't get home until 7:30 or later. Nonetheless, the set of items I'm eliminating from my life are as follows:

The sale of my Virago, I think, takes this week's prize as the biggest big-ticket item to be sold or discarded 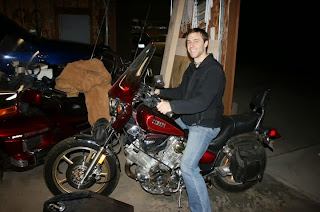 The remaining goodies have been laying around the house unused. I suspect before too long, I'll have to resort to further culling my hiking and camping gear, which is already reasonably minimalist.

See Rachel's blog, The Thirty One Day Minimalist, for a month targeted at 496 items to purge.
Posted by Adam Shirey at 11:55 AM No comments:

On Friday, Jacob and Reed really wanted to have a date evening with us - separately. It was too late, so we made Saturday Daddy and Reed, Mommy and Jacob date morning. Reed and I hopped on the bus and started making our way to Pike Place Market for our adventure. The first attraction we came to is the big brass pig:

I chose Pike Place as our Saturday destination specifically because yesterday was the eleven-year anniversary of me proposing to Andrea:

So Reed and I went to buy some flowers for her: 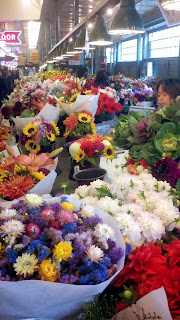 On the way back, Reed found some acorns that he alternately stomped on and dropped in a stream of rain and watched flow down the sidewalk. 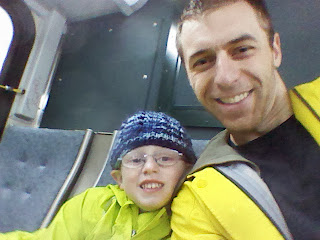 Posted by Adam Shirey at 3:18 PM No comments:

From the archives: hanging out with Sheryl Crow

Eighteen years ago, I met Sheryl Crow at the University of Minnesota. She came to visit the oncology ward, and I happened to be there that day with Matt. Some kind person had a Polaroid camera and snapped this photo of me with the Grammy winner:

Just the other day, Andrea got her new scanners for the business she's going to start (professional organizing of your home), one of which is a high quality photo scanner, so one of the first photos I scanned was of this happy encounter.

Seeing this image made me think about time I spent at the U of M with Matt; of listening to Tuesday Night Music Club; and of my life (in generalities and specifics) during the 90s: very painful, difficult times and fond, nostalgic memories.

During the eight months Matt was in the hospital, I know that Sheryl Crow, Hootie & The Blowfish and Clint Black all visited patients and family members. (I've got a great picture somewhere of Matt and Clint Black that I'll have to find.) I'm sure there were many others, as well. It's great to stop every now and then and think about people such as these that have done small acts that have had a major impact on others.
Posted by Adam Shirey at 9:08 AM No comments:

Email ThisBlogThis!Share to TwitterShare to FacebookShare to Pinterest
Labels: thoughts

Yesterday, I drove out to Rainier with another guy I met from Microsoft, and we hiked (along with hundreds of other people) to Camp Muir which is just over 10000' elevation, approximately halfway between the visitor center (~5400') and the summit (~14400').

We started at 9:00 at the visitor center with not a cloud in the sky. The summit looks rather small and totally doable: 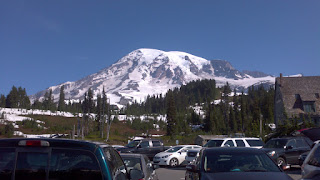 Even after the 9.4mi round-trip hike that included a 4.5hr ascent, the summit from Camp Muir still looked deceptively small and nearby. From the Muir Snowfield, it looks a little more menacing: 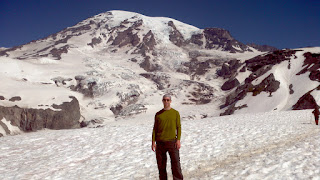 For what it's worth, Backpacker rates the Muir Snowfield one of the ten most dangerous hikes in America -- due mostly to extreme weather (which I didn't have yesterday) and the "x factor."

We took a bit of a detour on the way up to see Panorama Point, and I did take a panorama shot in which you can see Mt. St. Helens and a good portion of the Cascades. 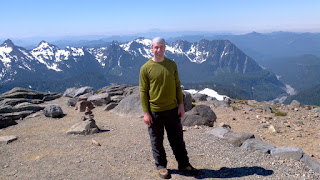 The hike up was quite exhausting. We were able to glissade occasionally for a speedier and more fun descent. Overall, I'm less sore now (but more sunburned) than after I did Mailbox Peak. 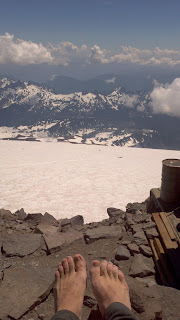 You can see the rest of my pictures in my Camp Muir album in Picasa.
Posted by Adam Shirey at 8:06 AM No comments: