Just a quick follow-up to yesterday's post about Reed's stitches: He's doing fine, though he doesn't like to have a band-aid on his lip.

Which reminds me. Part of the reason why we opted for stitches over just gluing his lip is that he has gotten into biting his lower lip (almost like a nervous twitch). That would just re-open the cut, so we had to go with something stronger. He's got an appointment on Friday to have the stitches taken out.

Also, I forgot to mention yesterday that he did not cut all the way through the lip. When he hit the bench, his teeth cut the inside of his lip, but the outside just split from the impact. Whew.

Here he is not eating his dinner, but playing with his crown and sort of showing Daddy his lip. 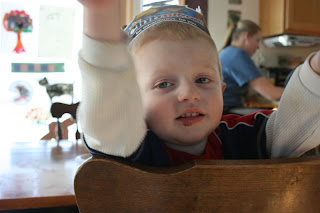