Eventually, all things merge into one, and a river runs through it.

Becca and Josh came over this afternoon to celebrate Reed's birthday since they won't be around next weekend when we celebrate with everyone else. Happily, Doug and Sarah also stopped by to join us. We had a lot of fun, though I have to admit that Andrea and I were complete bums. We were so exhausted (both of us took turns napping this morning) that - after lunch - we zonked out on the couch while the Gads played with both boys in the back yard. It was awesome catching a few extra Zs.

Some time after lunch but before the sandman came, the boys cuddled up and watched some TV (Wild Kratts, I believe). Reed fell asleep in Becca's lap, but Jacob sat between her and Josh on the floor. He was so excited to have his picture taken: 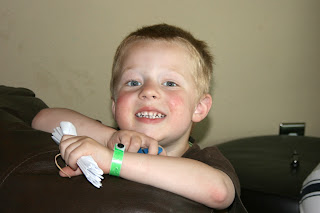 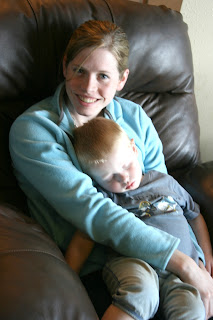 I finally got my butt around to mowing the lawn dandelions. It actually looks reasonably good now that it's cut.

We decided to go out on a walk before we put the boys down for the night, but we didn't get very far -- about a block away before the rain started again. I was on the phone with Nate for a while, so when we got home, Andrea put the boys to bed. In situations where one of us can't help out with bedtime, we usually go in after the fact; so once I got off the phone with Nate, I went in there to give Jacob a goodnight kiss.

As of late, Jacob has really enjoyed playing with my books. I hope this is an early sign that he'll be an avid reader, but even if it's not, it's pretty cute that he likes to take Daddy's books and carry them around with him. He stumbled upon my copy of A River Runs Through It the other day, wanted to play with it in bed, and when I went in for a goodnight kiss, this is how I found him: 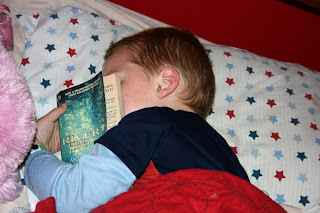