Gone to the park; and The 100 Thing Challenge

Tonight was quite relaxing. After work, I picked the boys up, headed home, ate dinner, and we went to the park to play. Andrea and I both brought our e-readers in the hopes that we could read while the boys played. As it happens, two- and a four-year-old boys like to play pretty dangerously, so we ended up spending probably two-thirds of our time making sure they didn't fall backward off the pseudo-rock wall. (While I'll admit there's probably some helicopter parenting involved, on at least one occasion, Reed would have fallen probably five or six feet had we not been there, so our concerns were justified.)

Right before we left, Andrea got the boys on some gymnastic-like equipment, and they wanted their picture taken: 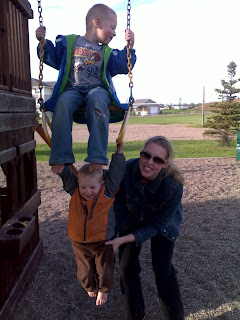 Speaking of our e-readers...

I've been trying to read more lately. One of the books I got from the library is The 100 Thing Challenge by Dave Bruno, and since Andrea is at this very moment at the grocery store, I've had about 20 minutes to read. I just finished the book, which has some great discussion, but I must confess, I think it's pretty poorly written. (For example, Bruno discusses the economics of abandoning American-style consumerism, yet his discussion is basically what he feels would happen to our economy if everyone took the 100 Thing Challenge for themselves. Why not take a day and go discuss with some economics professors at a local university how they think this kind of radical shift in consumption would actually affect the economy?)

That being said, I love Bruno's idea -- trim down all your personal possessions to no more than 100 items and live for a year, making yourself conscious of consumerism's dark side. In fact, I've informally tried to do this by giving away or selling many of my physical goods. I find, however, that my problem isn't so much with acquiring too many items (though I definitely love REI's scratch & dent sale) but with trying to do too many things. My personality is such that nearly every thing interests me, every project sounds fun, and I would happily take college courses and earn degrees until the day I die. So maybe I need to take my own challenge to reduce the number of activities in which I participate.

I haven't yet decided what book I'm going to read next. I'm thinking about maybe The 4-Hour Workweek, Ulysses, or The Razor's Edge.
Posted by Adam Shirey at 7:06 PM

Email ThisBlogThis!Share to TwitterShare to FacebookShare to Pinterest
Labels: outdoors