You have low iron

I'm a pretty big fan of giving blood. I've probably given somewhere on the order of eight gallons since I started giving. Last week, I became eligible to give again, but I didn't get around to going until today. Unfortunately, I have low hemoglobin, so I couldn't give. I've been deferred a few times for low iron (generally around 12.1 g/dL; the threshold for men to give is apparently 12.5 g/dL), but it seems like I'm so near the threshold that it's pretty minor. Out of curiosity, I checked Wikipedia's article on anemia, which cites a WHO article stating that the "haemoglobin [threshold] used to define anaemia" for men is 130 g/L, or 13.0 g/dL. So according to the WHO, apparently, I have anemia. Maybe I should just eat a big steak and some quinoa.

Speaking of food. A few weeks ago, I finally bought my shiitake kit from Fungi Perfecti. I've been going through the instructions, and some pretty impressive mushrooms have fruited. Here's a picture from a few days ago: 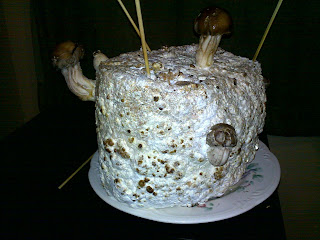 I need to start the process over again to induce more mushrooms to grow. In the meantime, I've got some research to do on some good recipes using shiitakes.

Another side note: I started summer classes this Monday. I'm not entirely sure how this is going to go given that I'm crazy busy at work, and our summer is already jam-packed with activities.
Posted by Adam Shirey at 8:34 AM