The other day, Andrea and I went to Riverside Park in St. Cloud and tried out my new hammock for camping and general use. I wanted to get a few shots, and while playing around with my camera, I took a few bracketed photos. Websites abound that describe how to do HDR photography, but I'll add my little ditty here about doing a simple HDR tone mapping from one set of bracketed shots.

First, I'll briefly mention that bracketed shots are a set of generally three photos of the same scene. One is under-exposed (a rather dark shot); one is over-exposed (very bright); and one is a more typical exposure. This can be done manually by changing the shutter time for each of the three shots, but it's significantly easier to have your camera do the heavy lifting. Canon (and probably Nikon as well) has a feature on their DSLRs called auto-exposure bracketing (AEB). With AEB, the camera will automatically adjust the exposure on three successive pictures. Just turn on AEB with your desired +/- exposure values, click the shutter button three times and you're done.

This is entirely too dark as a standalone shot. All the details are lost in shadows.

Still a little dark overall due to the bright light in the background, but reasonably good.

Too bright, with leaves getting washed out.

Individually, all these shots are pretty poor. However, they each have some valuable color data to contribute, so I combined them all together into a high dynamic range (HDR) image using Photomatix Pro. Photomatix does a great job of making HDR processing seamless. Starting with aligning images properly (since I didn't have a tripod, each of the three individual shots was slightly misaligned from the other two) and allowing me to easily tweak settings for how to do tone mapping or exposure fusion.

I've played with settings so little that I hardly know what I'm doing, yet it's interesting to see the results that Photomatix and other HDR software can produce, such as this fairly realistic blend of the three exposures: 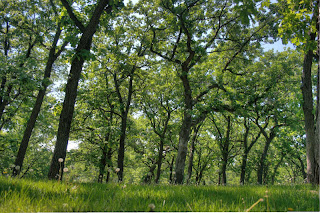