Reed had his two-year checkup the other day, and since it's easier for me to take a couple hours off from work than it is for Andrea, I took him. He's the perfect specimen of a toddler except for one minor thing. His pediatrician noticed a poor reflection of light off his left retina, which is usually minor but has the potential to be a big deal. She sent us right away to an ophthalmologist to see what the deal is.

Luckily, his eyes are fine (insofar as he has no retinal tear or amblyopia), though his eyesight is pretty bad, so our little two-year-old will be getting glasses as early as this week. He's following in his father's and grandfather's footsteps -- I had glasses when I was three and my Dad had them when he was 15 months.

Doug -- having many years of experience in optometry -- said that Reed will likely be amazed at how much he can see once he gets his glasses, so we're looking forward to seeing that improvement in his vision.

Incidentally, this morning before work, the boys found glasses to play with: Jacob and his sunglasses and Reed with my reading glasses. 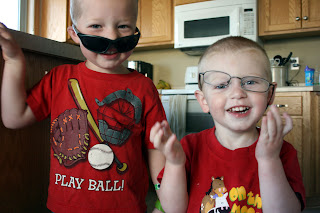 I almost forgot: yesterday was Jacob's last day of preschool! He had a great day there, and afterward, I picked him up, we went to ING Cafe for a donut and then to the library for some play time and to get a few books, then I dropped him off at daycare. We also played outside after work/daycare, had a bonfire and flew the kite for a bit.
Posted by Adam Shirey at 4:40 PM