The score is oogy to boogy

This last weekend, we went to Luke & Shannon's Wedding Party extravaganza at her parents' place in Eden Valley. It was a shindig for the wedding party and their significant others, and we had a great time for the half a day we were there. One thing that got me thinking was the shirt that Luke wore: a Calvinball design he saw on TeeFury.com originally made by a fella named Joe Wright. The shirt got me reminiscing about Calvin and Hobbes. I always enjoyed reading that comic as a kid, but as an adult, I think I appreciate it even more; the philosophy, the mischief and the joy of being a kid -- no-nonsense worldview and all -- are great.
Every time I think about Calvin and Hobbes, I necessarily think about how it ended. The last strip itself is of C&H going off into the woods to explore. More interesting -- and emotional -- is how Bill Watterson ended the 3160-strip-long comic: he quit the game while he was ahead, opting to "leave the party early" in order that in people not "[wish him] dead and cursing newspapers for running tedious, ancient strips like [his]."1. People often seem to hate how C&H ended, but I guess I liken it to movies that don't end cleanly or the way you would have predicted (think The Sixth Sense, Seven, Memento). Those are the movies that you're thinking about days, weeks and months afterward. The typical happy endings that you can predict early on -- those movies you forget about as you leave the theater or as you put the DVD back in its case.
I prefer the former. And while I certainly wish Calvin was still causing more mischief, I can appreciate Watterson's early departure from the party and that that is probably the precise reason why I'm thinking very fondly about Calvin right now.
We've been working on some serious house cleaning the last few days. We'll be doing a garage sale this weekend, and so far, we've moved four (or five?) vanloads of stuff over to the Ballmans' house. After spending a little time organizing things there after work, we went home and laid low. I think the heat has taken a toll on the boys. Jacob was gulping down water like crazy this evening, and he was rather quiet during his bedtime routine. I looked over from the computer to see him zonked out: 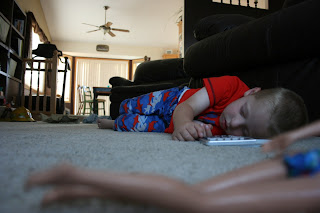