If you can't be well-rested, at least you can be adored

(Said to Andrea one morning when our kids woke up entirely too early.)

I finished reading Switch the other day, and last night I decided what book I would pick up next: Climb: Stories of Survival from Rock, Snow and Ice. Andrea bought that book for me before we were married -- probably close to 10 years ago. I had not cracked it open until now. Oops.

Climb starts off with a prologue about a number of people who have died tragically while rock climbing. The first essay discusses a few of the tragedies that author observed: four events in which five friends died on some mountain face. This book is going to be a real pick-me-up.

In other news, Reed apparently loves to be the center of attention. I was posting on craigslist a child backpack, and as I was taking pictures, he jumped in front of the camera to be in the frame. 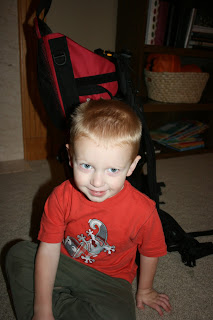 Andrea and I are hoping to go to Interstate Park in Taylors Falls for a day trip very soon. Unfortunately, it's getting too chilly to take the boys on an overnight camping trip, but there's plenty to do there for a few hours.
Posted by Adam Shirey at 5:26 AM