Yesterday was Jacob's first day of Sunday school, which Andrea taught. While the two of them were at Newman, Reed and I had our own adventure at Munsinger Gardens.

We started out walking around along the Mississippi River, and when Reed found a stick, he had to show it to me: 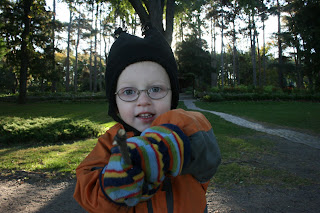 Then I had to have him stand next to the tall oak behind him, a la the abundant shots of people in front of sequoia trees: 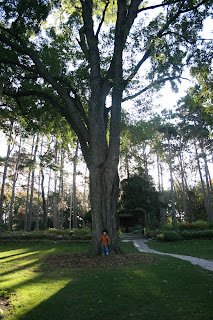 I don't think he particularly liked that, as he came running back to me in a real hurry. So we snuggled together for a bit and got a self-shot: 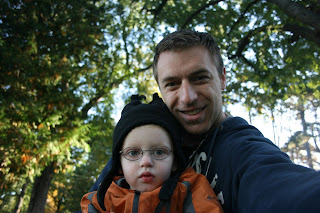 Then we took a break and sat on the rocks for a while, looking for ducks. We couldn't find any, so we talked about the trees and the rocks. (Reed kept pointing out mommy rocks and daddy rocks and baby rocks and mommy trees and daddy trees and baby trees.) After a while, we got up and started walking. When he asked me to put his hat back on him, I realized that - after putting it in my pocket while we were sitting on the rocks - it had fallen out. So we walked back to the rocks to find his hat. I couldn't find it anywhere, but Reed sure saw it. It took me a minute to realize that he did, in fact, see his hat: 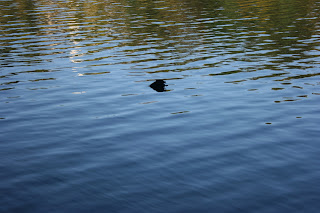 It was very slowly floating away. We stood in silence for a few minutes, watching his hat (and mittens therein), inching away from us. Had it been a warmer day, I might have been adventurous, but instead, I held Reed close and told him I was sorry for losing his hat.

In the end, it worked out okay: 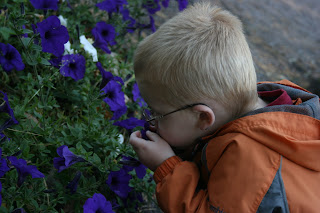