Pressing cider for fun and profit

This afternoon, Jacob and I went to a coworker's house to press cider. We got maybe 25 gallons of apples from my parents and as much as ten more from Aaron and Elissa. Add twice that from one co-worker's contribution and three hours of work, and we ended up with 17 gallons of pressed cider.

The first stage was washing the apples. Since none of the apples we used had been sprayed, we pretty much just chucked them into a tote with water, sloshed them around and called it good. The blue tote on the right is not full of apples, but is nearly full of water and has several layers of apples floating on top. 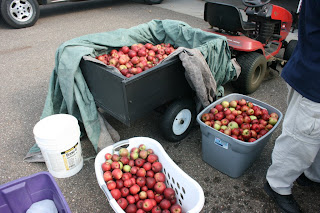 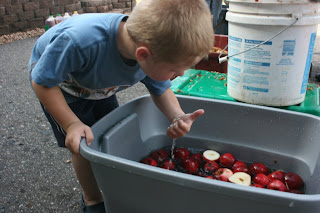 After washing, we put apples three to six at a time into the grinder nearly as fast as we could. The grinder is powered by a drill motor and consists of a hopper to hold the apples and a wooden cylinder with several dozen stainless steel screws to chew apart the apples into little bits. 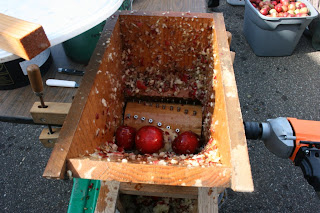 Sitting below the grinder is a five gallon bucket with a plastic grocery bag and a nylon mesh bag. The apple chunks go into the mesh, and some of the cider seeps out into the plastic bag. We took the mesh bag, put it into the press (below), dumped any juice back into the bag, rolled it up, and began pressing with a two ton bottle jack. 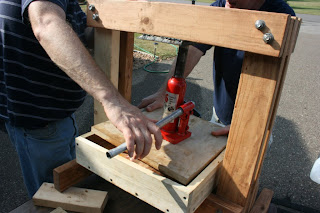 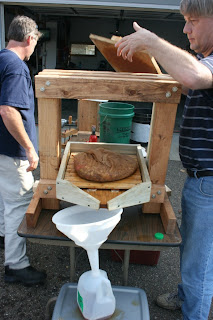 We pressed each bag of apple guts twice, though probably 95% of the juice came from the first pressing. With each pump of the jack, I could see waves of cider flowing out. 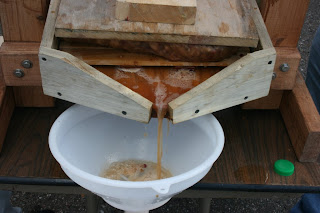 With the cider being so sugary, we had a good number of friends trying to get in on the action. I believe these were yellowjackets, though it's possible they're paper wasps. 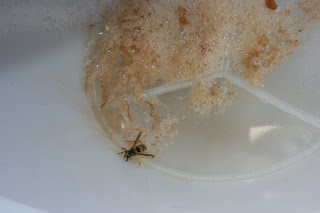 After pressing, we chucked the pressed apple bits into a container (which we filled three times over) for composting. 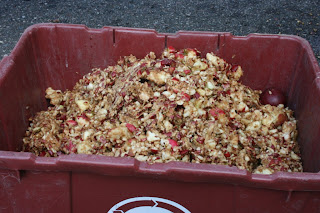 I'm hoping to whip up a batch of hard cider using the following recipe for Sunset Cider: