For being so Intellectual, you sure make a lot of mistakes

Just over a year ago, I acquired The Intellectual Devotional by way of swap.com. I was interested in the book because it's a full year of different subjects -- one per day for 365 days -- and each day of the week is a particular topic (philosophy on Saturday, religion on Sunday, etc.).

I enjoyed the book, but it was fairly common for me to find errors: some factual, some grammatical, and some downright silly, such as this one: 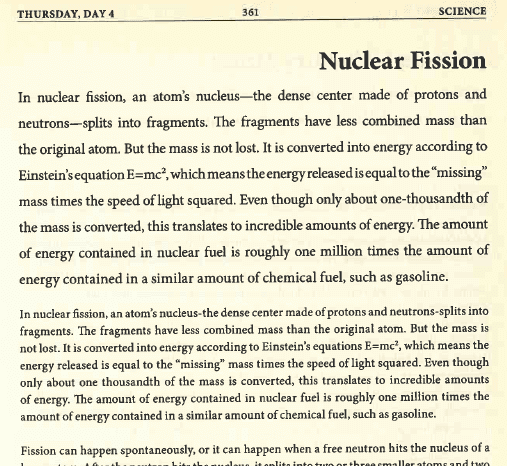 Apparently that first paragraph is so important that they thought it should be repeated.

One of my gripes about the substance of the book is that it seemed science subjects were shorter than others. Maybe that's just my perception, but when each subject is no more than one page, I find it hard to believe that the authors had a hard time filling that one page.

Also, their "additional facts" were much more trivia than useful knowledge. The above page, for example, included the additional fact that "The two fission bombs the United States dropped over Japan in August 1945 were Little Boy and Fat Man." More interesting facts are that Uranium-235 -- the most common type of nuclear fuel, also mentioned on this page -- has a half life of 700 million years and that Uranium-238's half life is over 4.4 billion years.

Or you could just tell us the names of the first two fission bombs used against an enemy during war. That works, too.
Posted by Adam Shirey at 12:44 PM

Email ThisBlogThis!Share to TwitterShare to FacebookShare to Pinterest
Labels: books