For Dad's birthday last year, Mom told him she'd send him skydiving with me and Nate. Andrea decided she'd also go with. We finally got around to it this weekend, though Nate opted out.

We went to Westside Skydivers in Winsted. It took a while for us to finally get through the queue of jumpers. In the meantime, one of the awesome staff members (whose name eludes me) took my camera and got an awesome action shot of Jacob and Reed ready to jump out of the plane: 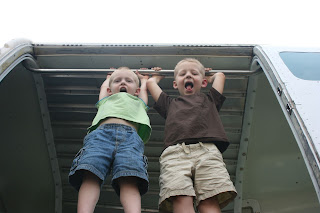 We got ready for our jump in the hangar. The boys had been pretty squirrely. You can see on my hand the altimiter that let me know when to pull the rip-cord.﻿

We got in the plane with a total of about 15 people. It promptly fell backward with too much weight in the rear. Not exactly a great sign. We unloaded, shifted people around, and took off. Dad brought his digital camera with him and snapped a few nice pictures.

We jumped from 13,000 feet and fell for nearly a minute at what I figure was shy of 90 vertical miles per hour. All of us had altimiters on, and when we hit 6,000 feet, we each pulled our own rip-cords to deploy the parachutes. Unlike my first jump, the cords didn't get wound up. Mike and I floated back to the ground and had a nice smooth landing. Andrea and Dad both loved jumping, and neither of them were freaked out by it. 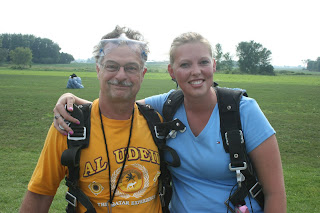 As I did last time, I took a video of this jump with my handy-dandy $15 helmet camera, and again, as with last time, the camera was tilted slightly up, leaving most of the awesome stuff just south of the camera's frame.

The full album of pictures we took is available within my Google+ albums.
Posted by Adam Shirey at 10:56 AM