Of Coffee and farmers markets

We haven't quite settled into Seattle living yet. As part of my relocation package from Amazon, we're provided with temporary housing until we find a permanent residence. We're all set for that, but it's not available until about September 1st. Our stuff isn't delivered until we're in our new residence, so we're pretty much living with whatever we fit into our four pieces of luggage.

That's not to say that it's bad, but it limits our options for what we can do around the apartment. We've spent a lot of time at Lake Union, but the water is cold to begin with, and the weather is cooling off. Instead, we've been trying to find things to do with the boys around Seattle. That's been including a lot more coffee, trips to parks and other neighborhood attractions, and expeditions downtown.

Last week, my boys and I went to Rudy's Barbershop for a haircut. It occurred to me that Reed had never had his haircut at a professional establishment, so I got a picture of his first professional haircut. We explained to him that you wear a cape to keep hair off your shirt, and it's kind of like what a superhero wears. That immediately prompted him to hold his arms out like he was flying:

He and Jacob did well and were very polite.

We also have been to the awesome REI Flagship Store, where the kids can play both inside and out: 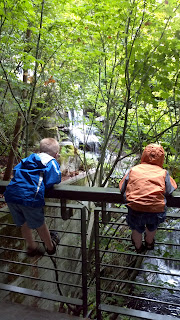 Last weekend, we hit up the Magnolia farmer's market, got some amazing blueberries for the boys to snack on, got coffee at Serendipity Cafe, and played at the local playground. I was able to convince the boys to not eat all the blueberries -- they will usually eat every last berry of any kind -- and I made some blueberry scones for breakfast a few days later. 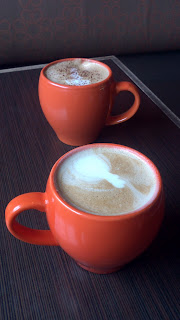 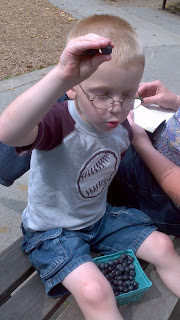 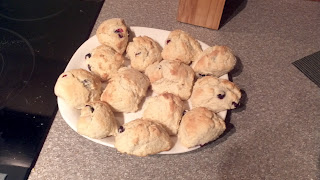 We also explored the area around the Seattle Center (which, most notably, includes the Space Needle). There is a great pizza place, Zeeks, where they gave each of the boys a chunk of pizza dough to play with while they waited for lunch:


One evening, we walked around Pike Place Market: 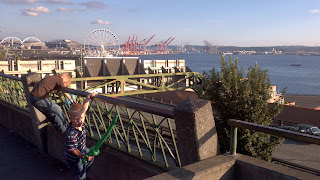 And on Wednesday, the Personalization Platform team (that would be me and my co-workers) went on a team outing to Blake Island. This shot is from our trip back into the city: 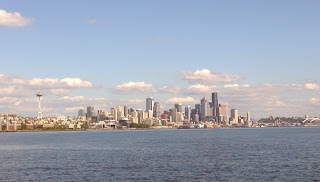 Email ThisBlogThis!Share to TwitterShare to FacebookShare to Pinterest
Labels: seattle