The first 24 hours in Seattle

We've survived our first day in Seattle. Yesterday, we moved into our temporary apartment, which is about a half mile from Amazon.We've had a wild ride the last few days. On Tuesday, a crew packed up all of our stuff while I was at my last day of work at LexisNexis.

Wednesday was Andrea's last day teaching at Talahi, and the movers loaded all of our stuff into the truck. It was supposed to be a pretty quick job, but the oppressive heat and humidity made it last from about noon until 9:00pm.

Also, we had a very unfortunate change in our family plans: while we had planned to bring our rescued beagle, Robby, with us, he was hit by a car and we had to euthanize him.

Wednesday was pretty rough, but we crashed at my parents' place for the night, wrapped up some loose ends on Thursday, and headed to the airport first thing Friday morning.
After some emotional good-byes, we made it to our flight. Airlines are... interesting businesses, though; by some esoteric logic, when you buy four tickets at the same time for the same family -- all with the same last name -- they put only two seats together and the other two are isolated from everyone else. We had to specifically request seating together, lest one or both of our boys fly for almost four hours without a parent nearby. Nice work, Delta.

We ended up with two pairs of seats together; Jacob and me, Andrea and Reed. 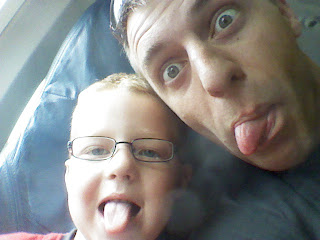 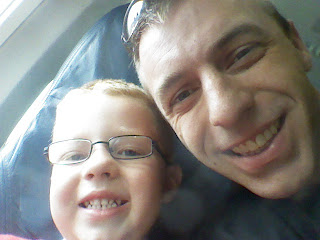 After a pretty uneventful flight, we got to SeaTac airport and grabbed our bags. With four checked bags, four carry-on bags and two car seats, it was a pretty severe ordeal to make it to the shuttle to the rental car site, but once we got there it was fairly smooth sailing.

A short drive to our new apartment and an hour or two later, we were mostly settled. I would be remiss in my geek duties to neglect mentioning the awesome Android app I found for our Roku. After a long, tiring, emotional day of travels, we lay low, met the neighbors upstairs via our patio, listened to some Pandora and watched a little bit on Netflix.

This morning, we started to explore our new city by going to its skyline icon, the Space Needle. We started by grabbing a coffee: 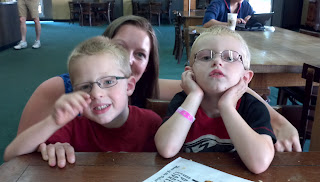 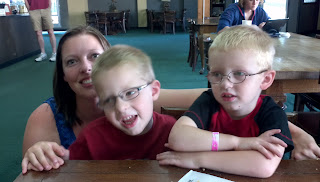 Across the street from Uptown Espresso is a Tesla showroom, so Reed and I took our own picture in front of it.
And only a few blocks from there is the Space Needle. 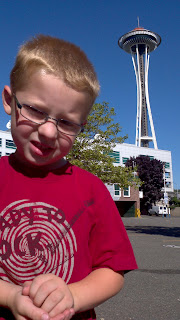 It took us a while to get through the line, but when we got to the top it was worth it for this shot of Mount Rainier, which doesn't do justice to the view we actually had: