Last night, I was musing about how much Jacob and Reed are like me. Two things last night made me think of this: climbing and peanut butter.

While memory is a fickle thing, I recall snacking on pure peanut butter - directly from the jar - with Matt many years ago (possibly shortly after we moved to Minnesota?). Last night, the boys wanted an alternate dinner, so Andrea told them they could make their own PB&J sandwiches if they wanted. I retrieved and opened the two jars for them, but I left the whole process to them so they could learn. While they did make a mess, it was extremely entertaining for me to watch the two of them. They were so happy to be going through the process of making a sandwich. 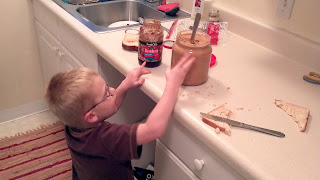 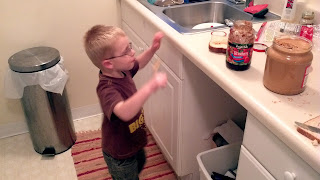 Jacob made his dinner first, and when it was Reed's turn, he had a "dirty" knife, which he had to lick clean. Then he dipped the knife into the peanut butter and spread it on the bread haphazardly. Then the knife was dirty again, so of course he had to lick it clean. Lather, rinse, repeat. 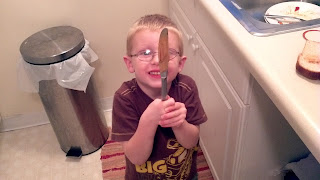 This was one of my transcendent moments of parenthood.

The second topic is climbing. Andrea took a wonderful video of the boys climbing the kitchen doorway a few days ago. They've grown accustomed to climbing it, which is usually amusing for us but can occasionally become frustrating when we're trying to get something done in the kitchen. One day after Andrea told Jacob to stop climbing, he replied, "But Mom, I need to climb!"

So this weekend, while my parents visited, Dad and I built a very simple 2x4 frame structure that will be used for as much climbing as the boys can reasonably get. At some point, I'll add monkey bars, a cargo net, and all sorts of other goodies. For now, it's just a simple frame that they can climb up, and last night, I drilled a small hole on one side and put one of my old static climbing ropes through it. I then tied a few knots in it and showed the boys how to climb a knotted rope. They did quite well, and we then got a video of them trying it out:

All of this got me thinking about how much I perceive that my boys are similar to how I was. There's the whole topic of nature versus nurture, and it seems to me that with every new research paper I read on the topic, I tend to believe more long-term behavioral traits tend toward nature.

Of course, loving peanut butter and an inherent need to climb things also seem to be typical of young boys, so these similarities may very well be due to the fact that I was a young boy once that liked to climb on stuff and eat dollops of peanut butter at a time. Nonetheless, I really enjoy watching my sons doing things that I enjoy so thoroughly.