The end of the era of rock climbing

Fifteen years ago (roughly), I started rock climbing at the BCC. Over the years, I put a lot of time into it. It was my favorite hobby, and I attribute it in part to Andrea and me getting together: when she took her breaks from working on the pool deck, she would visit me in the rock wall while I was climbing or belaying. In fact, our first date together was to the Monticello Community Center to go climbing: 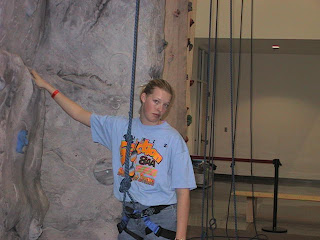 I was such a climbing fiend that I even (partially) scaled the fieldhouse at BHS -- until the principal caught me and told me to not do it again.

Early on, my two better climbing partners were Aaron M and Mandy. She and I climbed at Becker and at Vertical Endeavors.

About halfway through college, though, after climbing several times a week with Roomie -- indoor and outdoor, winter spring and fall -- I cut back on my climbing, spending more time on my computer science. By the time Andrea and I got married, I was mostly out of climbing. 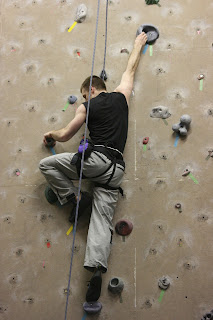 Every so often, I would go again for the heck of it -- never doing particularly well, but always having fun. On a few occasions, we were able to get Ryan and/or Luke to join us, and good times were had by all. 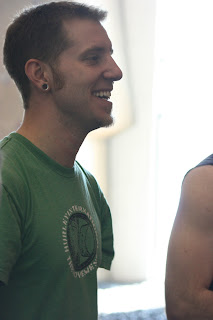 As a birthday gift to me in 2008, Andrea got a group of friends together for one more trip to VE. Even with our new family started, I was fortunate to be able to get some climbing in on occasion.
Now that we're in Seattle, there are plenty of locations for me to climb, but it seems fewer and fewer opportunities to go. So the other day, I decided that it's time I hang up my harness and shoes and call it quits for good.

For many years, I would hold onto every single letter or card my Grandma sent me. I had a box of papers in my closet of things from school that I wanted to keep. Any number of random trinkets that had some perceived value or meaning were tucked away somewhere. I found that getting rid of those things was initially very difficult but ultimately cathartic.

In his book, The Happiness Hypothesis, Jonathan Haidt discusses (among many other things) how people adapt to their environment. Buy a bigger house and you'll fill it with stuff, for example. Our house in Clearwater is just shy of 3000 square feet, and when we moved, we got rid of a huge amount of stuff that we never or very infrequently used. Now that we're in a 1400 square foot house, I feel like it's still oversized for our need, and we could fit into an 800 or 900 square foot house without hardly noticing.

Combine Haidt's lessons with those of Daniel Gilbert's from Stumbling on Happiness. Not only do we adapt, but we don't know that we'll adapt. In 1950, the average house size was 983 square feet; today, it's around 2500 even though the average family size has decreased. (See House Lust: America's Obsession With Our Homes.) I assert, as do a growing number, that having fewer things can be much better for us.

That being said, I've had a difficult time translating that belief from the realm of physical things to hobbies. I've been more than passingly interested in climbing, camping, hiking, biking, photography, psychology, meditation, learning the guitar, learning Japanese, small business ownership, iPhone development, machine learning/recommender systems (which, by the way, is what I am doing at my new job), and a host of other topics. 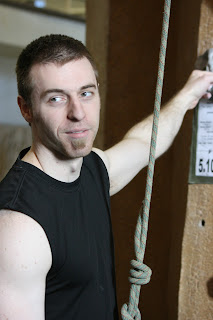 Email ThisBlogThis!Share to TwitterShare to FacebookShare to Pinterest
Labels: thoughts