The Ninja and the Photographer

Our boys have taken to being ninjas, covert moves and all. So much so that today, I made them masks out of my old Perl shirt, cutting eye holes and trying to fit them as best as I reasonably could given my lack of expertise in sewing. Here's Jacob holding an empty spool from when I was toiling over thread and needle. I think he said it was his ninja bomb:

While I was getting Jacob's ninja hood set and taking the above picture, I noticed Reed grabbed my camera and started playing with that.
So I let him take my picture: 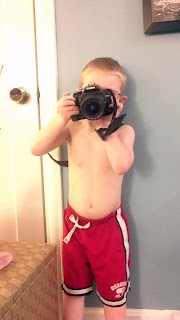 While I took his:
This was all before 9:00am or so. We spent the rest of the day going to Discovery Park, organizing the storage room (and purging quite a bit of stuff we don't need), playing, and even getting my motorcycle towed to Seattle Used Bikes. It's in rough shape, so I'm calling in the big guns, which is to say, anyone that knows more than "gas goes in the tank, engine goes vroom, brakes make it stop."
Posted by Adam Shirey at 8:06 PM