Nothing lasts forever. Almost nothing.

This morning as +Andrea was dropping me off at work, I pointed out to Jacob and Reed the hotel that is being demolished to make way for one of Amazon's three new buildings: 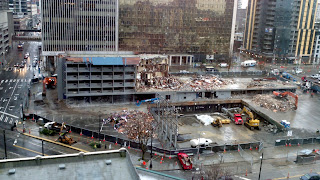 Jacob asked a great question: Do buildings not last forever?

I explained to him why this particular building was being demolished. The company I work for bought the land and the hotel because they want the land so they can build a tall building for people to work in. In order to put the new building up, they had to take the old one down.

Maybe to him, this was a random idea he threw out. Maybe he had a deep thought here. At least to me, this is an incredibly abstract, mature concept. In fact, I just read an interesting blog post a few days ago about the importance of numbers to emptiness in Buddhist philosophy and how John von Neumann - a "founder" of computer science - demonstrated that numbers can be bootstrapped in the absence of anything physical.

In other words, numbers exist in emptiness -- forever.
Posted by Adam Shirey at 9:47 AM