Beginning (or rather, continuing) to simplify

When we left Clearwater, we had a house that was nearly 3000 square feet, which, I hate to admit, is more than 20% larger than the average single family home size for the year it was built. We moved to Seattle after purging a huge amount of stuff. Now we're in a house that is nearly 1400 square feet. Still I see things all over the house we don't use. I aim to fix that.

Last weekend, Andrea and I went through our closets and dressers. Currently, each of the four of us has a dresser that is basically full of clothes, and Andrea and I have clothes in the closet. I recently donated my two suits, one of which I hadn't worn in seven years; the other I wore exactly one time two (or was it three?) years ago.

What resulted from our brief trip through our clothes was a burgeoning pile of clothes in one of three varieties: "this doesn't fit" or "I don't like" or "I don't wear for some reason." 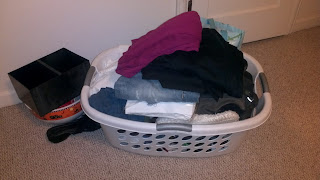 We also went through our CD collection. You remember CDs -- those things that came out 31 years ago? Now that we each have a smart phone and a laptop, I figured there's no reason to keep any CDs except maybe for road trips. (Unfortunately, my car doesn't have an auxiliary input.) So we donated those to the Seattle Public Library.

"Don't you want to keep that?" she asked. I shook my head. "Are you sure? You love that band."

I've become quite firmly of the opinion that entirely too much stuff is held onto for sentimental reasons or for just-in-case reasons. And as I get rid of more and more excess junk from my life, I've found it actually very relieving to be rid of it. It opens up the space in our smaller house. It requires less mental processing to acknowledge and think about the things that are there. It takes less physical work, too, as we don't have to clean up, care for, work around those items.

We've got big plans for the future. Those plans don't involve an excess of stuff, and it's better to get rid of them now.
Posted by Adam Shirey at 1:12 PM